New release: various "I WANT THE BEATLES TO PLAY AT MY ART CENTER!" [DVD] 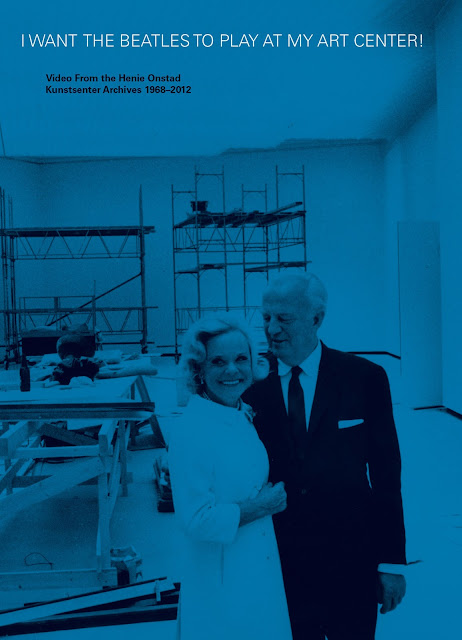 This DVD presents seminal works of music, performance, dance, theater and installation art from the nearly 50-year history of Henie Onstad Kunstsenter (HOK). When HOK founder Sonja Henie exclaimed that she wanted the Beatles to play at her art center,  in essence she expressed its founding ambition to produce and stage a lively cross-artistic program that captured the contemporary spirit of the day in live form. This release is filled with previous unreleased material from HOKs history, and shows for the first time Kjartan Slettemark dressed up as a poodle in 1975, Mauricio Kagels commisioned piece EX-POSITION from 1978, and the brilliant recording of John Cage reading Muoyce in 1983.

"And now we take the first step into the future." Former director Ole Henrik Moe added this bold statement when HOK opened its doors to the public in 1968.  The museum of the future at Høvikodden would position dynamic time-based art alongside its collection of modernist masterworks of paintings and sculpture  ,demonstrating how the various forms art elaborate and collaborate with each other. Instead of expanding its art collection, the majority of HOK’s budget would go to events and exhibitions, to the production of new time-based works, and not least, to document ephemeral art.

I Want the Beatles to Play at My Art Center! presents a small selction from Henie Onstad Kunstsenters videoarchives. The DVD contains a newly restored version of Pål Bang-Hansens promotional feature A Forum of the Arts from 1969 where amongst others Arne Nordheim performs his commisioned work for HOK Solitaire. For the first time one can see how the Norwegian Studio for Electronic Music looked like in 1975 and view an excerpt from Terje Rypdals opera Orfeus vender seg og ser på Eurydike. In addition the DVD contains more recent productions with artists like MoHa!, KILLL, Stephen O`Malley and Christopher Nielsen/Masselys.

This release accompanies the exhibition I Want the Beatles to Play at My Art Center! – Tidsbasert kunst ved HOK 1968-2011 opening October 28th at HOK with performances by Deathprod and Nils Bech. In relation the book Mot det totale museum is published by Forlaget Press together with a 2LP on Prisma Records. The exhibition and releases are curated by Lars Mørch Finborud.