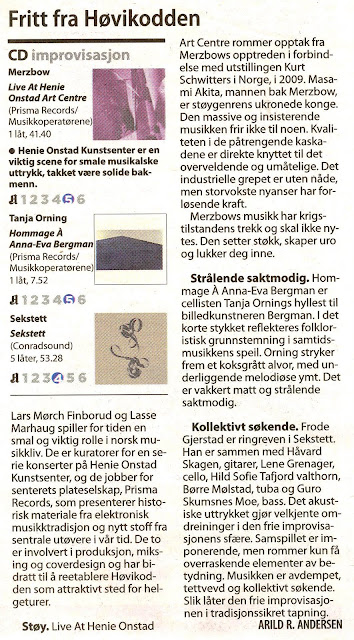 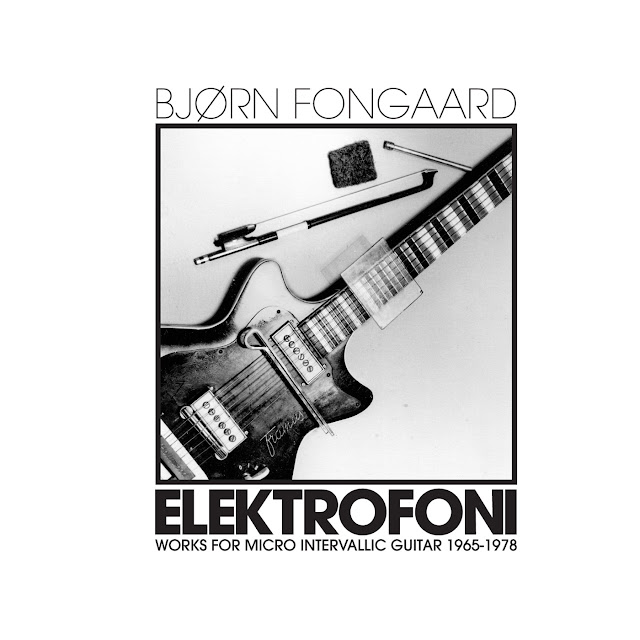 Masami Akita’s Merzbow project is the biggest name in noise music. Few other artist enjoys the kind of respect within their fields as Merzbow does within the noise scene. If talking about noise music there is simply no way getting around Merzbow. Since 1979 Akita has worked relentlessly producing hundreds of records. He also has a long list of collaboraters: Richard Pinhas, Sunn 0))), Autechre, Pan Sonic, Jim O’Rourke, Boris, Gore Beyond Necropsy, Smegma and many others.

Merzbow performed at the Henie Onstad Art Centre on October 11th 2009. This performance was for the exhibition ”Kurt Schwitters in Norway”. Since Akita has sited Kurt Schwitters as one of his main influences for his music, and took his name from Schwitters’ Merzbau sculpture, it was a natural choice to have Merzbow perform at the centre on the opening weekend of the exhibition. The complete 40 minute performance is presented on the ”Live at Henie Onstad Art Centre” CD.

The CD is mixed and mastered by Lasse Marhaug and the inner sleeve features a unique photo of Masami Akita inside Scwitters’ Merzbau. Merzbow in Merzbau.

Limited edition of 500 copies.
Posted by Marhaug at 02:21 Ingen kommentarer:

Prisma Records is proud to present the first release dedicated to the music by the late Norwegian experimental composer and electronic music pioneer, Sigurd Berge (1929-2002). This release shows some of Berge`s earliest experiments with tape-machines and early synthesizers and is taken from three reels found in the Henie Onstad Art Centre music archives in 2009. The reason why these tapes are located here are probably because Berge worked for several years at the Norwegian Studio for Electronic Music, located at the art centre. Berge also was a part of the electronic music concert-series Elektrofoni which took part at the centre from 1968 until 1983.

The second part of this release is dedicated to one of Norway`s first multimedia art installations entitled BLIKK. The work was commissioned for the Henie Onstad Art Centre in 1970 and created by the artists Irma Salo Jæger, Jan Erik Vold and Sigurd Berge. The installation consisted of Jæger`s kinetic sculptures, Vold`s abstract poetry and Berge`s electronic music, all blended together with one of Norway`s first computer generated laser-light shows. The multimedia piece was so complicated to produce that the engineeers Halvor Heier, Birger Komedal & Harald Schiøtz was hired for technical assistance. The pioneering work BLIKK was exhibited at the Henie Onstad Art Centre between April-May 1970.

Prisma Records is proud to one of Norway`s most famous and acclaimed experimental composers and electronic music pioneers for the first time on a complete CD release.
Posted by Marhaug at 02:18 Ingen kommentarer:

In 2002 the performer and cello player, Tanja Orning, was asked by the director of the Henie Onstad Art Centre, Karin Hellandsjø, to play at the opening of an Anna-Eva Bergman exhibition. Tanja Orning decided to compose a completely new piece inspired and dedicated to Bergman`s art. The piece was entitled Hommage À Anna-Eva Bergman.

In February 2009, the large retrospective exhibition Surrealism, line and form – Anna-Eva Bergman`s formative years 1949-52, opened at the Henie Onstad Art Centre. Once again Tanja performed and a couple of months later she was invited by the art centre to record the piece for the in-house label Prisma Records. On April the 13th Tanja Orning and sound technician Thomas Hukkelberg came together in the centre`s Studiohall, to record the piece.

Tanja Orning is a performer, improviser and composer. After studies in Oslo, London, and Indiana University, she held the position as a co-principal cellist in the Stavanger Symphony Orchestra for 5 years until she left for Oslo in order to realise a number of projects. She is currently playing with groups such as Christian Wallumrød Ensemble, asamisimasa, Dr.Ox and Polygon as well as her solo-project Cellotronics which resulted in a CD in 2005. Orning is currently undertaking research in contemporary performance practice at the Norwegian Academy of Music.

Prisma Records is proud to present this entrancing and lyrical composition on a single track CD release, pressed in a limited edition of only 300 copies.
Posted by Marhaug at 02:12 Ingen kommentarer:

Posted by Marhaug at 01:16 Ingen kommentarer: 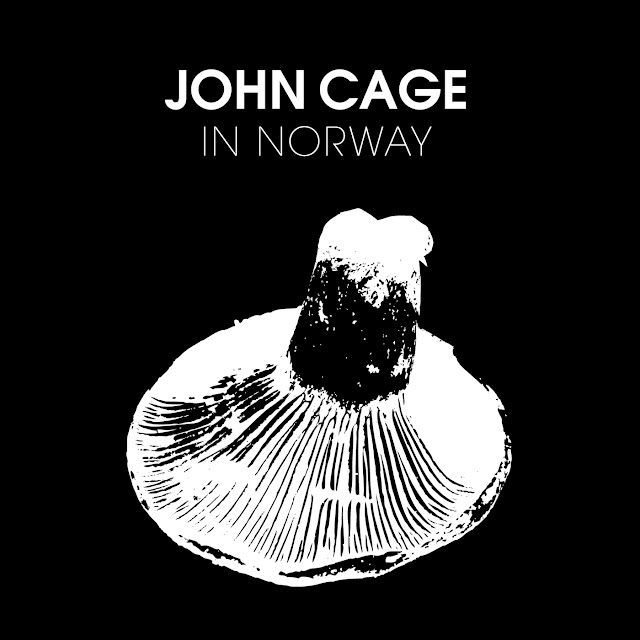