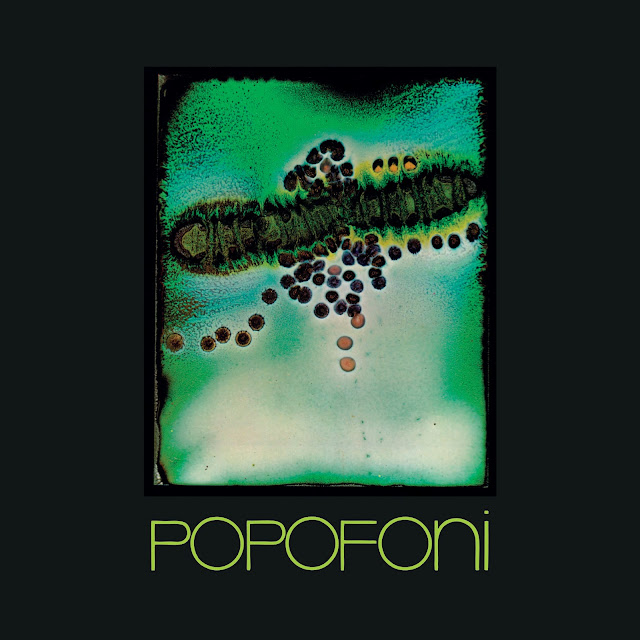 This 2LP is a reissue of the holy grail of Norwegian free-jazz and electronic music, Popofoni, released by Sonet in 1973. It features compositions by Arne Nordheim, Terje Rypdal, Kåre Kolberg, Gunnar Sønstevold and Alfred Janson played by an extended Jan Garbarek Quintet.

The Popofoni-project was initiated after a heated debate on Haagen Ringnes’ TV-show Åpen Post in autumn 1969, which dealt with the subject popmusic. Standing on one side you found the defenders of pop, actress and singer Elisabeth Grannemann, comedian and record producer Rolv Wesenlund and artist and record label owner Arne Bendiksen – who defended his 1969 Eurovision winner Oj oj oj så glad jeg skal bli. In the other corner was the “cultural elite” represented by literature researcher Erling Nielsen and pianist and Beethoven-expert Amalie Christie. Both sides expressed grave concerns about that their opponent’s music impaired their listeners abilities. During the broadcast, Grannemann performed a parody of an avant garde-composition which included throwing dishes and yelling, with direct reference to composer Arne Nordheims music. Some weeks later Nordheim picked up the handkerchief and responded by composing a pop song with avant garde qualities, Solar Plexus, performed by an expanded Jan Garbarek Quartet. Because of the great media attention this quarrel attracted, the organization Ny Musikk (IRCM) and Henie Onstad Kunstsenter decided to ask the experimental composers Kåre Kolberg, Alfred Janson, Gunnar Sønstevold, Terje Rypdal and Arne Nordheim to write new compositions in the meeting point be- tween pop and avant garde – hence the name Popofoni.

The result was performed at a concert at the art centre in april 1970 and later documented on a double LP release on Sonet in 1973. It was pressed in 500 copies, and is now one of Norway’s rarest records.
This reissue is produced by Lars Mørch Finborud and Lasse Marhaug for Prisma Records, 2012. The release comes in a limited edition of 500 copies,
Posted by Marhaug at 03:17