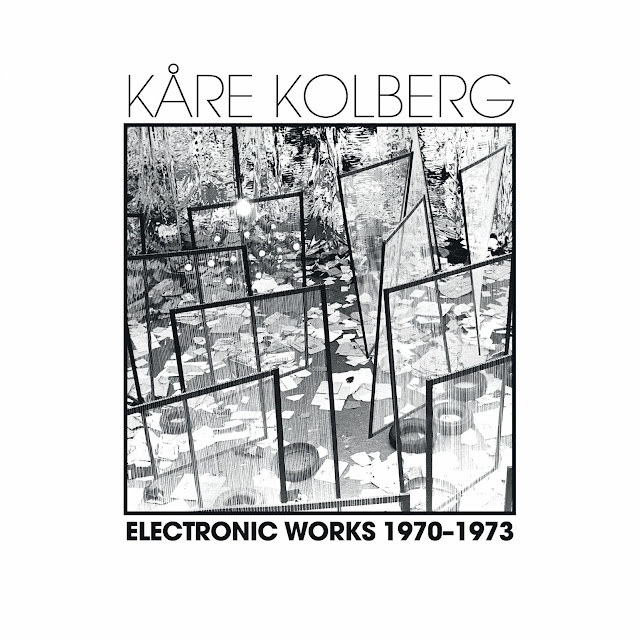 Kåre Kolberg (b.1936) is one of Norway’s foremost contemporary composers and is regarded as one of the pioneers of early electronic music and cross-disciplinary art in Scandinavia. He has composed music for film, theatre and chamber orchestras to jazz acts such as Svein Finnerud Trio and Jan Garbarek. This LP contains three early electronic pieces by Kolberg and comes in a limited edition of 300 copies.

NOVA
The electronic tape composition Nova was made by Kåre Kolberg for the visual artist Anders Kjær’s multimedia-installation of the same title, exhibited at Henie Onstad Art Centre between 2–22 of august in 1972. The installation included a specially designed light-show and music playing from tapemachine in a loop – blended together with a huge 13x19 meter installation consisting of glass, rubber tires and piles of paper that the audience could walk through. Nova dealt directly with contemporary society’s destruction of nature and the glooming environmental threats of the 70s. It is regarded as one of Norway’s first examples of installation art. The sound was recorded in Polish Radio Experimental Studio in Warsaw, with the help of technician Bogdan Mazurek. The Polish Radio Experimental Studio was founded by Józef Patkowski in 1957. Kolberg was not the only Norwegian to use it; Arne Nordheim also went there to record his electronic music, including the famous Solitaire, which was presented at the opening of the Henie Onstad Art Centre in 1968.

Omgivelser
Omgivelser (Enviroments) was a commissioned piece made for the Norwegian Broadcasting Corporation (NRK) in 1970. It was composed as a soundtrack for a short film directed by Jan Horne. The idea was to melt abstract film impressions that showcased different sides of the environmental debate of the 1970s, together with experimental electronic music in order to create a singular expression. This piece was also recorded in Studio Eksperymentalne in Warsaw, together with sound engineer Bohdan Mazurek. Kolberg crafted the piece using the studio’s vast sound archives and two pre-recorded tapes. One tape consisted of different recordings Kolberg had made with jazz singer Karin Krog, and the other different field recordings by Kolberg, including Norwegian nursery rhymes sung by Kolberg’s oldest son. In the studio the material was treated with ring modulators and different filters. The result was broadcast in 1970. Since the standard TV-volume levels at the time were so low-fidelity, the dynamic range of Kolberg’s piece didn’t come out right. Kolberg therefore over the years re-presented the piece several times at various concerts.

KEISERENS NYE SLIPS
The title translates to The Emperor’s New Tie. This piece was composed and recorded in 1973 at EMS (Electronic Music Studios) in Stockholm, using a PDP 15/40 computer. It was programmed in the EMS-1 computer language developed in the same studio. Keiserens nye slips was commissioned by Fylkingen, Stockholm.
Posted by Marhaug at 03:12